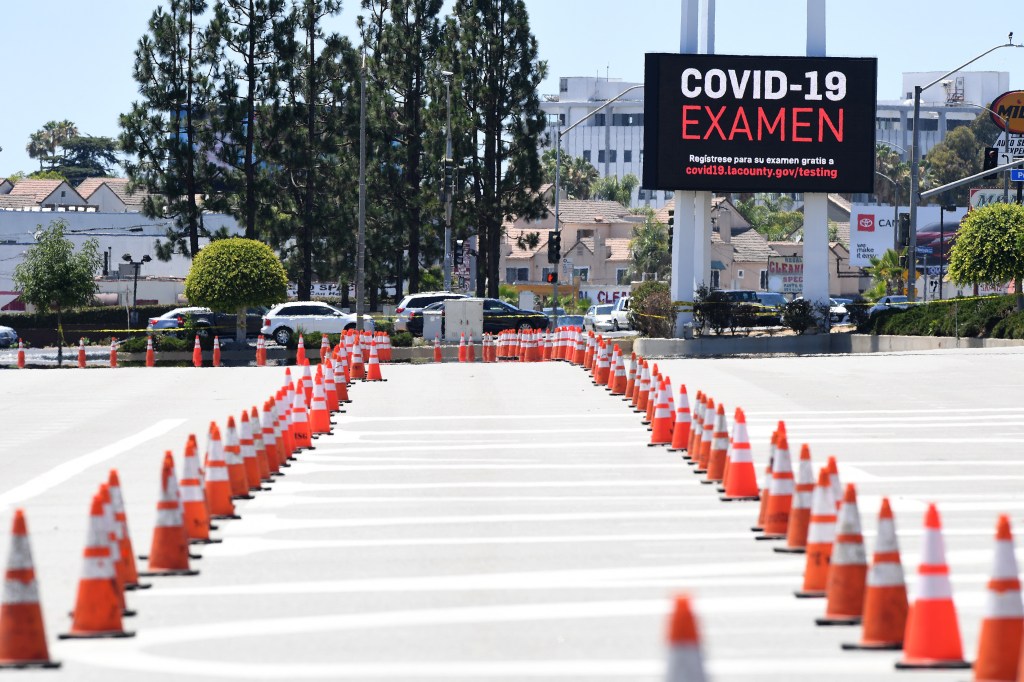 Both numbers represented a decrease from the previous several days, but officials said new cases and reported deaths are typically lower on weekends as some labs only report on weekdays.

The midday report did not include updated numbers from Long Beach and Pasadena, cities that operate their own health departments. Pasadena reported one additional death on Sunday, bringing its total to 109, and 10 additional cases, for a total of 2,004. Long Beach had not posted any weekend updates; its totals remained at 8,285 confirmed cases and 177 deaths.

LA County’s update arrived as Dr. Deborah L. Birx, the Trump administration’s coronavirus coordinator, declared Sunday that the nation was in a “new phase” of the pandemic that was much more sprawling across the country than last spring’s outbreaks in major cities like New York and Seattle.

She recommended that people living in communities where cases are surging should consider wearing a mask at home, if they live with someone who is especially vulnerable because of age or underlying medical conditions.

“What we are seeing today is different from March and April — it is extraordinarily widespread,” she said on CNN’s “State of the Union” news program. “It’s into the rural as equal urban areas. So everybody who lives in a rural area, you are not immune.”

Of the new cases reported countywide Sunday, 68% occurred among individuals under the age of 50, according to the Los Angeles County Department of Public Health. The cumulative total of cases among people between 18 and 49 years old is 60%.

Dr. Birx said that, in her recent travels, she had seen “all of America moving,” making it doubly important for people to understand the attendant risks, given that cases have surged in many popular holiday destinations. “If you’ve chosen to go on vacation into a hot spot, you really need to come back and assume you’re infected,” she said.

Infected people without symptoms can unwittingly seed numerous chains of infection. “By the time you wait for someone to come forward to the emergency room, you have widespread community spread,” Dr. Birx said.

County officials joined Birx in urging residents to embrace recommended safeguards to stem the spread of the virus.

“We join in prayer and sorrow with all those experiencing loss during this pandemic and send our wishes for peace and healing,” said Barbara Ferrer, the county’s director of public health. “We are hopeful that collective actions taken over the past couple of weeks have allowed us to get back to the work of slowing the spread. It is important to keep in mind that we will need to continue with all the modifications and sacrifices for weeks to come.

“This is especially true if we want to see our schools re-open for classroom instruction,” Ferrer said. “With increased contact among non-household members, there are many more opportunities for transmission of COVID-19, particularly when public health directives are not followed.

“We’re safer in the community only if we follow the very specific directives issued by public health. We have a collective responsibility to take immediate action, as individuals and businesses, to slow the spread of COVID-19. The Health Officer Orders are clear about what we need to do.

“If we can’t find it in us to follow these mandates, including wearing face coverings, distancing when around others, and not having or attending gatherings with non-household members, we jeopardize our ability to move forward on our recovery journey.”

Hospital admissions have been leveling off over the past week, with 1,856 people hospitalized as of Sunday and 31% in intensive care. That’s a drop from 2,002 hospitalizations on Friday.

Testing results were available for 1,790,586 individuals with 10% of all people testing positive, Ferrer said.

They all had underlying health conditions, officials said.

With coronavirus cases soaring across California and the nation, the debate in Washington over a new relief package to help people and businesses weather the crisis is set to take center stage in the coming week, and negotiators were meeting over the weekend in hopes of making progress on a deal.

“The president’s determined to spend what we need to spend,” said Steven Mnuchin, the Treasury secretary, speaking Sunday on the ABC program “This Week.” “We’re acting very quickly now.”

Unemployment benefits lapsed this week for tens of millions of people, but officials have struggled to agree over new aid. Mr. Mnuchin’s remarks came after he and Mark Meadows, the White House chief of staff, met with top congressional Democrats in a rare Saturday meeting on Capitol Hill.

Speaker Nancy Pelosi, who hosted the meeting with Senator Chuck Schumer of New York, said that staff members would meet on Sunday and that the main negotiators would convene again on Monday. They called the discussion on Saturday productive but said that the sides remained far apart on several matters.