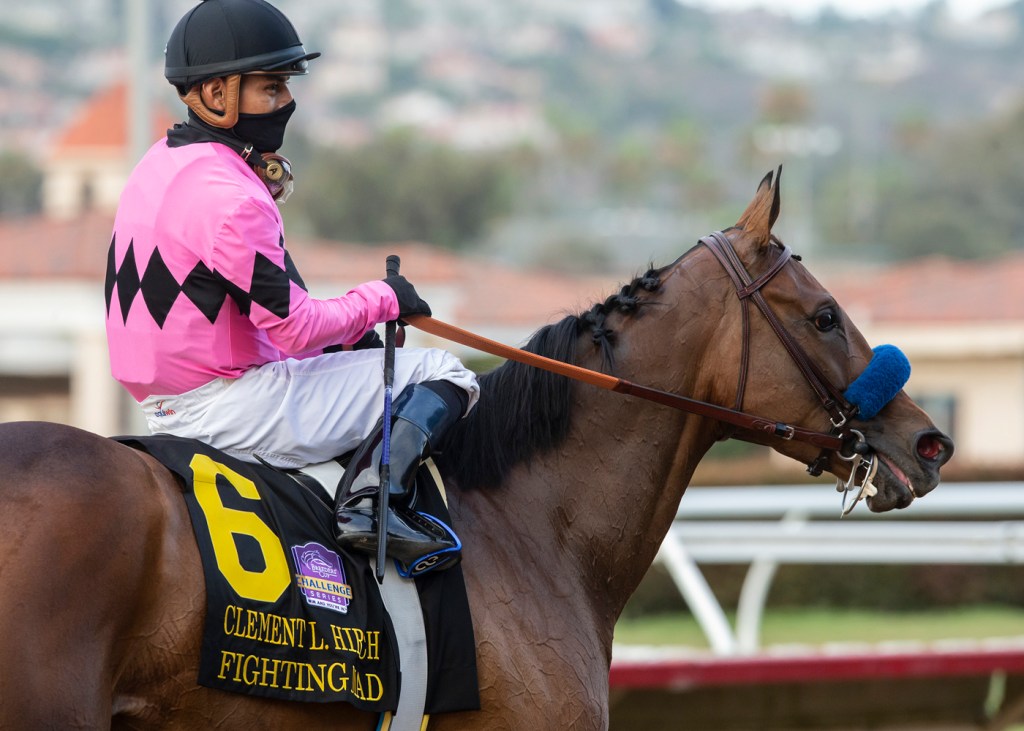 It’s not easy to impress Bob Baffert. Not with the number of equine greats the Hall of Fame trainer has housed in his barn over the years.

But Fighting Mad, a 4-year-old New Year’s Day filly, did just that Sunday at Del Mar, speeding gate to wire to win the $250,000 Grade I Clement L. Hirsch Stakes for her second consecutive graded-stakes victory and third of her career.

“Basically, she ran ’em off their feet,” Baffert said.

But he wasn’t so certain Fighting Mad was going to fire her best shot while saddling her in the paddock. She got so worked up they had to hose her down before the race.

“I was a little bit worried about her because she was getting pretty warm, really getting hot,” Baffert said. “The way she was acting in the paddock, she ran incredible … she was trembling and sweating. She really lost it in the paddock today. I was very worried about that, but that’s how good a filly she is.”

Fighting Mad, with Abel Cedillo aboard, popped the gate, opened a quick lead and never looked back while setting quick fractions of 23.15, 46.55 and 1:10.57 as the 9-5 favorite. She held off a late-closing Ollie’s Candy by a half-length for the first Grade I victory of her career.

A winner of five of eight lifetime, Fighting Mad came into the race off a Grade II score in the Santa Maria Stakes at Santa Anita on May 31. She won the Grade III Torrey Pines Stakes last summer at Del Mar, proving she loves the ocean air. She’s three of four with a second at the track.

Ce Ce, the 2-1 second choice, finished third, 4 3/4 lengths behind Ollie’s Candy, who won the race last year. Final time for the 1 1/16 miles was 1:43.46 as Fighting Mad earned an all-expenses paid berth in the Breeders’ Cup Distaff at Keeneland on Nov. 7.

“I had the same instructions today that I had yesterday (for his gate-to-wire victory aboard Thousand Words for Baffert in the Shared Belief Stakes),” Cedillo said. “Get her out of there and see if you can get to the front. She really broke sharply and wanted to go right away.

“I got her to relax some on the backside, then she went right on with it. She’s just an amazing filly.”

Fighting Mad opened a 1 1/2-length lead up the backstretch and was never seriously threatened, though Ollie’s Candy was making up ground in the final sixteenth of a mile.

“Her speed is her weapon,” Baffert said. “Just let her bounce away from there. When you look at her you wouldn’t think she could go that far, but she has so much speed. When she started opening up I thought, ‘Well, he (Cedillo) must know what he’s doing.’”

The biggest disappointment of the race was Hard Not to Love, the 3-1 third choice in the wagering. She shifted in and bumped Ce Ce soon after the break, dropped back to last and stayed there the entire way, beaten about 13 lengths.

Asked after the race if he thinks Fighting Mad can successfully navigate the Breeders’ Cup Distaff’s mile and an eighth, Baffert wasn’t immediately concerned.

It’s been a successful Del Mar meet through the opening 10 days for Fighting Mad’s owners, Gary and Mary West. They also own Maximum Security, who won the San Diego Handicap on July 25 in a stirring stretch duel with Midcourt and will likely run next in the $500,000 Pacific Classic on Aug. 22.

“I’m happy for the Wests,” Baffert said. “They live down here and they got to see some action finally.”

Del Mar still is not allowing spectators because of the coronavirus, but track officials relaxed their protocols beginning July 31 and are allowing a limited number of owners to attend the races. They’re not allowed in the paddock or winner’s circle, but can view the races from the second-floor grandstand and box seat area.

It’s the first time since mid-March that owners in California have been allowed to watch their horses run in person.