Alexander: A castoff comes back to burn LAFC 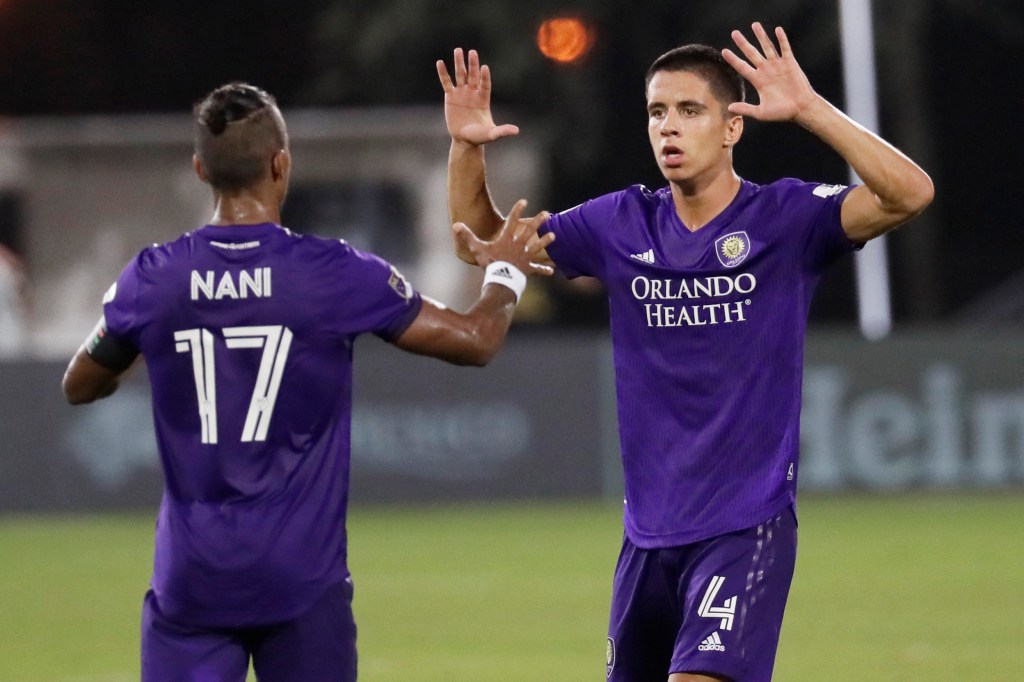 If you follow LAFC, maybe you remembered Joao Moutinho before Friday evening. You darned sure remember him now.

He was the No. 1 pick of the 2018 MLS Super Draft, a Portuguese defender who played a college season at Akron and helped lead the Zips to the NCAA men’s soccer final four. But after 14 games in his rookie season in Los Angeles, he was traded to Orlando City that December for Mohamed El-Monir.

The latter did not get off the bench when LAFC and Orlando City met Friday in the quarterfinals of the MLS is Back Tournament, on one of the glorified rec fields of Disney’s Wide World of Sports in Orlando.

The former? He made sure that LAFC, for all its talent and all its accomplishments and everything nice that people say about it, still has yet to play a championship game.

Moutinho headed in a corner kick from Nani in the 90th minute, tying the game 1-1 after it seemed that LAFC had been able to outlast the pesky underdogs from just outside the Disney bubble. Moutinho then added a successful penalty kick in the shootout, which Orlando won 5-4 to move on to the semifinals and send LAFC home.

It’s become sort of a distressing pattern for the club’s faithful. The first year, Real Salt Lake eliminated LAFC in the knockout round of the playoffs. Last year, after finally disposing of the rival Galaxy to reach the Western Conference finals, LAFC was eliminated by Seattle.

In this tournament, it got its revenge against Seattle in the Round of 16, only to lose to a team that has never qualified for the MLS playoffs, has finished 10th, 11th and 11th in the Eastern Conference in the last three seasons, but now is two victories away from a trophy.

“They are making progress as a team,” LAFC coach Bob Bradley said of Orlando. “But it’s not easy for me to assess the other team on a night where I’m disappointed that we weren’t able to be at our best.”

Sadly, no one asked him his opinion of Joao Moutinho’s performance.

Did this goal mean more to Moutinho?

“I mean, I guess so,” he said in a postgame teleconference. “Obviously I still have a lot of friends and a lot of people I respect back there at LAFC. I spent a good year there so I made some friendships.

“Yeah, I guess it might have that extra special feeling. But honestly, I just feel happy that I was able to help the team in a situation that we needed it. I was happy that I got the goal and that we won on penalties.”

Wasn’t an accident, either.

“We knew that they left a big window with a lot of space defending set pieces,” he said. “I was in charge of going to the back post on our attacking set pieces, corners and free kicks, so I knew I had some space there. We’d already took, I think, two or three corners and I saw that I had the chance to get the ball and I got it just a bit short.

“So yeah, I was expecting the ball to go there. I kept my eye on it and I knew the space was there. Great ball, great cross, and I was fast enough to get in front of the defender (Jordan Harvey) and just head it in.”

Until then, LAFC had every reason to believe it had dodged a bullet. Orlando had a 7-0 advantage in shots in the first half and 17-8 for the game, as well as a slight possession advantage (52.3 percent to 47.7). Bradley Wright-Phillips gave LAFC the lead in the 60th minute on, officially, his team’s first shot of the game. (Unofficially he’d scored in the 32nd minute, but VAR detected Brian Rodriguez offside by maybe the width of a fingernail.)

It probably cannot be overstated how much of a David over Goliath moment this was. The celebratory scene that the FS1 cameras showed in the Orlando locker room – everything but champagne, it seemed – pretty well told that story.

There have been duller team mottos, for sure.

I guess it’s an honor of sorts when people beat you and feel the need to celebrate wildly. But that’s not much consolation.